Tony Bennett performing in Cohasset and Hyannis on August 14-15 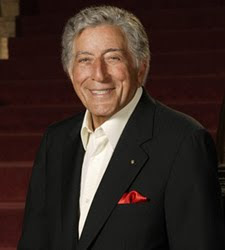 Jazz legend Tony Bennett is performing two shows in Massachusetts this weekend: at the South Shore Music Circus in Cohasset on Saturday, August 14, and at the Cape Cod Melody Tent in Hyannis on Sunday, August 14. Both shows start at 7:00 p.m.
Tickets are available online at the Music Circus and the Melody Tent or can be purchased at the gate the night of the concert.
A fifteen-time Grammy Award winner, Bennett's voice has helped define the American songbook since the late 1940s, when he began working with Pearl Bailey, Bob Hope and Frank Sinatra. In recent years he has recorded with a host of great singers, including Stevie Wonder, k.d. lang, James Taylor, Michael Buble and others.
Bennett is also a renaissance man whose reputation as a serious painter has grown over the years. He painted the image for the official poster of the 2010 New Orleans Jazz and Heritage Festival, and regularly donates his artwork to a variety of worthwhile causes.
For year round jazz in Massachusetts, visit MassJazz.com.
For tourism information in Massachusetts, visit MassVacation.com.
at August 13, 2010