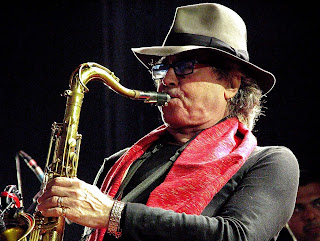 Gato Barbieri, world-renowned tenor saxophonist from Buenos Aires, Argentina, is performing at Regattabar Jazz Club in Harvard Square on Saturday, April 27, 2013 at 10:00 p.m.  (The 7:30 p.m. show is sold out.)

Now living in New York City, Barbieri was an early exponent of John Coltrane and Ornette Coleman, then blended his jazz influences with Latin American music, creating an explosive cross-genre form that became the forerunner of World Music.  He first gained fame when he did the soundtrack for the movie Last Tango in Paris.

Here is a schedule of upcoming concerts at Regattabar Jazz Club, located at the Charles Hotel on Bennett Street in Harvard Square, Cambridge.

For year round details on jazz in Massachusetts, visit MassJazz.com.

For visitor information go to MassVacation.com.
at April 27, 2013