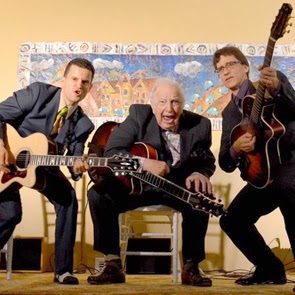 (NOTE: TODAY'S CONCERT HAS BEEN CANCELLED DUE TO THE SNOWSTORM)

This Sunday afternoon, December 15, 87-year-old jazz guitar master Bucky Pizzarelli takes the stage with fellow guitarists Frank Vignola and Vinny Raniolo at the Shalin Liu Performance Center in Rockport. Tickets are $25 to $39, and can be purchased online (here), by phone ( 978.546.7391), or at the venue. The concert starts at 3:00 p.m..

Pizzarelli is a veteran performer who has worked with such music giants as Frank Sinatra, Stephane Grappelli, Tony Bennett, and Zoot Sims.  Now he is shepharding two of the world's most promising swing guitarists of the next generation into the limelight.

Vignola has performed around the world various artists, ranging from Madonna and Ringo Starr to the Boston Pops and Wynton Marsalis. The New York Times called one of the brightest "stars of the guitar."

New York City native Raniolo is one of the youngest new guitarists to make a wave in the music world, playing alongside  Pizzarelli and Vignola as well as David Grisman and Tommy Emmanuel.

Here is a schedule of upcoming concerts at the Shalin Liu Performance Center in Rockport.