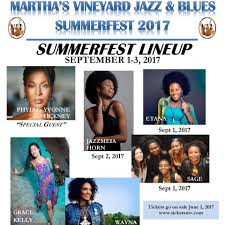 Etana, a Jamaican-born singer, debuted in 2006 as one of the most powerful and distinctive voices in reggae.

Jazzmeia Horn is a Nubian jazz singer, winner of the 2015 Thelonius Monk International Vocal Jazz Competition, and known as one of New York’s rising stars.

Phyllis Yvonne Stickney is a stand-up comedian, motivational speaker, published author, poet, writer, Founder/Executive Director for the non-profit community based organization Alternative Careers in the Arts, and named one of the 200 African American Women who has changed the world by Essence Magazine.

Grace Kelly is a 24-year-old saxophonist, singer, and composer who wrote her first song at age seven, and recently won “Jazz Artist of the Year” in the 2016 Boston Music Awards and “Alto Saxophonist of the Year” by NYC Jazz Fans Decision 2016.

Wayna is a Grammy-nominated, Eithiopian-born, sing/songwriter who was called “a standout on the indie front” by Billboard Magazine.

Find year round jazz in Massachusetts at MassJazz.com

For visitor information, go to MassVacation.com
at August 29, 2017