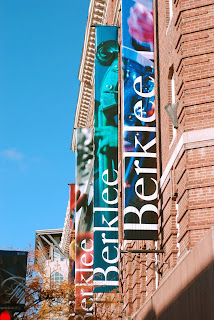 The Berklee College of Music in Boston was named the Number One Hollywood music school in the world, according the Hollywood Reporter, which took a survey of industry insiders to rank the top 10 music schools making an impact in the movie and music industries there.

"The college’s impressive complement of Grammy, Emmy, and Oscar winners was among the distinctions that earned it the top spot in this inaugural list of Hollywood feeder institutions. Commercial music expert Timothy Taylor put it simply: “Berklee people are everywhere in L.A.”" wrote the Berklee Office of Communications.

Here is the full story from Hollywood Reporter.

Berklee beat out other top music schools including Julliard School of Music, UCLA, USC and the Royal College of Music in London.

The New England Conservatory of Music, also based in Boston, was ranked Number Eight.

For year round details on jazz in Massachusetts, visit MassJazz.com.

For tourism information go to MassVacation.com.
at November 01, 2013